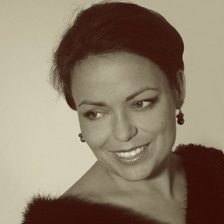 Born in Poznań.
She graduated with honours from the vocal and acting department of the Ignacy J. Paderewski Academy of Music in Poznań in 2002, in the vocal class of Prof. Katarzyna Rymarczyk. She received a scholarship from the minister of culture in 2000-2001.
She completed a postgraduate course at the Carl Maria von Weber Hochschule für Musik in Dresden in 2004, in the class of Prof. Christian Elssner. At that time she also received a scholarship from the DAAD Foundation in Bonn. She is a prize-winner of many vocal competitions in Poland and abroad, including the First Ignacy J. Paderewski Polish Lieder Competition in Bydgoszcz (third place and a special mention, 1998), the First Halina Halska Soprano Competition in Wrocław (first place and a special mention, 2000), the Fifth Inter-school Polish Lieder Vocal Competition in Warsaw (third place, 2001), the international festival for young opera singers in Rheinsberg (the soprano part in Rossini’s “Petite Messe Solennelle”, She was the finalist of the Sixth St. Moniuszko International Vocal Competition – special award from Ludwig Van Beethoven Foundation and performance of Mimi in G. Puccini’s ‘La Bohème’ in The National Theatre in Lviev.
She has taken part in many concerts and opera galas in Poland and abroad, including an opera gala featuring the Staatsoper orchestra in Berlin (2000), an opera gala featuring the Brandenburg Philharmonic Orchestra in Rheinsberg (2000, 2001), the Moniuszko Gala at the Poznań Philharmonic (2002), She took part in the Wratislavia Cantans festival (2001), performing the solo part in ‘Petite Messe Solennelle’ conducted by Stefan Stuligrosz. With the Poznań Philharmonic conducted by Stuligrosz, she appeared in Mozart’s ‘Requiem’ (2002). She took part in G. Mahler’s ‘Fourth Symphony’ and E. Grieg’s ‘Peer Gynt’ in the Frankfurt Oder Philharmonic. She took part in F. Zelenka’s ‘Requiem’ in Frankfurt am Mein in 2007.
At the Fifth Universitas Cantat International Festival of University Choirs in Poznań in 2002, she took solo and choir part in a preview performance and CD recording of Krzesimir Dębski’s symphony “Nihil homine Mirabillus”, conducted by the composer himself.
She performed the soprano part in the production of ‘Viellicht war ich ein Azteke’ in 2004 – a pastiche of six modern world operas. In the same year she was Pamina in Mozart’s “The Magic Flute” at the Szczecin Philharmonic conducted by by W. Kunc.
In December 2004 she made her debut at the Teatr Wielki – Polish National Opera in the part of Lisa in Tchaikovsky’s “Pikowaja Dama” conducted by K. Kord (directed by M. Treliński).
In January 2005 she performed the soprano part in Siegfried Matthus’s ‘De Vacuo Spatio’ in Magdeburg (Germany).
From the years 2006/2007 season she has been a soloist at the Warsaw Chamber Opera, where she made her debut as Donna Elvira in Mozart’s ‘Don Giovanni’. The artist can be admired as Pamina in Mozart’s “The Magic Flute”.
In November 2005 she took the solo soprano part and CD recording in S. Mathus ‘Te Deum’ composed for the grand opening of Frauenkirche Cathedral in Dresden, and conducted by Kurt Masur.
From the year 2005 she co-operated with Nova Symphony and performed during many concerts in Warsaw – A. Dvorzak’s ‘Stabat’(CD recording), Mozart’s “Die Kronung-messe”, Mozart’s ‘Requiem’.
She performed in ‘Eurpean Christmas’ TV program in Bamberg in co-operation with Munchen television.
In 2005/2006 she co-operated with Frankfurt Oder and Bonn Philharmonic – (L. v Beethoven’s ‘9th Symphony’ (conducted by H. Beisel), G. Mahler’s ‘4th Symphony’, E. Grieg’s ‘Peer Gynt’ (conducted by F. Bellon).
In June 2006 she began co-operation with Teatr Wielki – Polish National Opera – performs as Pamina in Mozart’s ‘Magic Flute’ (conducted by K. Kord, directed by A. Freyer). In 2009 in Polish National Opera part Madeline Usher in Ph. Glass’s “The fall of Usher’s Hous” (cond. W. Michniewski, directed by B. Wysocka).
In 2006 she took part in ‘Magda M.’ TV show directed by M. Dejczer, where she performed aria Cio-cio-san of G. Puccini’s ‘Madame Butterfly’.
She has been a soloit in Józefowicz’s and Stokłosa’s Buffo Theatre since 2007 where she performs during such plays as: Italian Night, French Night, Russian Night.
In February 2007 she began cooperation with Baltic Opera in Gdańsk where she took the part of Mimi in G. Puccini’s ‘La Bohème’ conducted by J. Przybylski.
2009 Warsaw National Philharmonic – CD record in “Der Berggheist” L. Spohr (cond. Ł.Borowicz).
2010 co-operated with J. Maksymiuk “Requiem” G.Faure and “Gloria” F. Poulenc.
In October 2007 she went on a tour to Netherlands and Belgium with Nova opera from Bydgoszcz, during which she performed Cio-cio-san in G. Puccini’s ‘Madame Butterfly’. She also performs this part in Nova Opera and Teatr Wielki Grand Theatre in Poznań. In Nova Opera she performs also part of Rusalka in Dvorak’s “Rusalka”, part of Ulana in I.J. Paderewski,s “Manru”, part of Pamina in W.A.Mozarts’”Die Zauberflote”, part Mimi in G.Puccini’s “La Boheme”, part of Halka in Stanislaw Moniuszko’s opera “Halka” and in Oktober 2013 part Nedda in G. Donizetti’s “Pagliacci”.
She has taken part in new year’s eve concerts in Poland and other European countries.
She cooperates with Warszawa, Poznań, Szczecin, Gdańsk, Łomża, Częstochowa, Płock, Rzeszów, Zabrze, Białystok, Sudecka Philharmonics and with Frankfurt/Oder, Bonn, Dresden, Frankfurt am Mein.
Since 2009 she is teacher of vocal class in Music Academy Bydgoszcz.