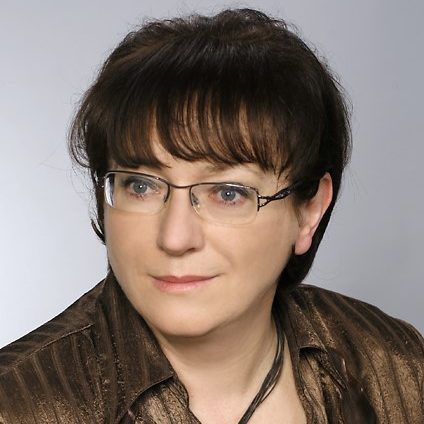 Born in 1963 in Inowroclaw, composer. Completed State Music School of 1st and 2nd degrees in Inowroclaw, in piano class of prof. A. Drzewiecki. Graduated from Faculty of Composition and Theory of Music on Feliks Nowowiejski Academy in Bydgoszcz, in class of prof. F. Wozniak. Aleksandra Brejza works as a senior lecturer in The Academy. Her lectures cover composition, composition techniques of XXth century, introduction into composition and arrangement.
Received schollarships of: Minister of Culture and Arts (1998), and Association of Polish Composers – APC (1989). Participated in courses of young composer, organised by APC, and International Composition Courses that took place during Bartok seminars in Szombathely in Hungary (1992). Awarded with the main prize of the 1st Academic Competition of Fugue, organized by The Academy in Bydgoszcz (1986). Received awards in T. Baird National Composition Contest of Young Composer by APC, twice: for String Quartet and for Ultima Moriena, and for Great Symphonic Orchestra (1993). Awarded during International Composer Contest “Pomorski Siew Sw Wojciecha” in Gdańsk for “Kantyczki na chor mieszany”. She was also finalist of the International Composition Contest – The London Prize – organized by the London Camera Choir (2000) and laureate of the 2nd prize in National General Psalmodic Contest in Katowice (2002).