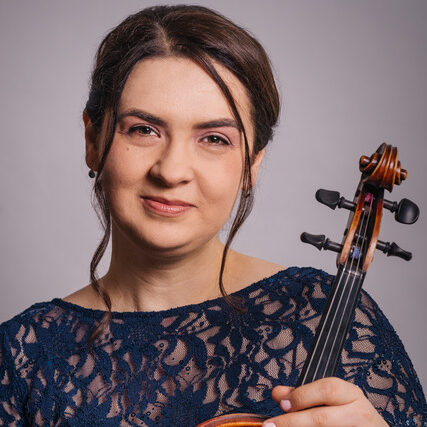 Jadwiga Stanek graduated with honors from the Feliks Nowowiejski Academy of Music, where she studied playing the viola in the class of Prof. Jan Paruzel. She started and continues her career in her alma mater, where in 2012 she was conferred a doctoral degree in musical arts in the field of instrumental studies. She participated in the European Program Life Long Learning – Erasmus, running Musical Interpretation Courses at the Conservatorio Superior de Música “Oscar Espla” in Alicante and the Academy of Arts in Banská Bystrica. The violist was improving her skills at many Master Courses of Musical Interpretation in the country and abroad, cooperating with such artists as Bruno Giuranna, Victor A. Pikayzen, Kurt Lewin, and Jan Paruzel. Her concert activity includes regular viola solo and chamber music recitals in Poland and abroad.

The repertoire of the violist features important pieces of viola solo and chamber music, from Baroque to the present. She is also interested in repertoire of 20th-century European composers. She is keenly involved in chamber music concerts in various instrumental ensembles. Jadwiga Stanek won music awards in the categories of chamber music at international competitions in an instrumental duo. In May 2013, along with violinist Bolesław Siarkiewicz, Dr. Hab. she won the Second Prize at the 23rd International Competition of Musical Interpretation in Barletta [Italy] for interpretation of the Sonata Impromptu by William Alwyn and Duo in E minor Op. 13 by Louis Spohr. In July 2018, also in the chamber music category, in a duo with clarinetist Borys Biniecki, PhD she won the First Prize – Premio Assoluto at the 2nd International Competition of Musical Interpretation in Sarzana [Italy], performing compositions by Rebecca Clarke and Gordon Jacob.

In 2012 – 2016, Jadwiga Stanek served as Chairman of the Board of the Konsonans Foundation in Bydgoszcz. She received three awards presented by the Konsonans Foundation Council for her meritorious service to this organization in 2014 –  2016. In October 2018, she received the Award of the Marshal of Kujawsko – Pomorskie Voivodeship for her special achievements in development of music in the Region of Kuyavia and Pomerania. The violist works also for the Ignacy Jan Paderewski Pomeranian Philharmonic in Bydgoszcz.