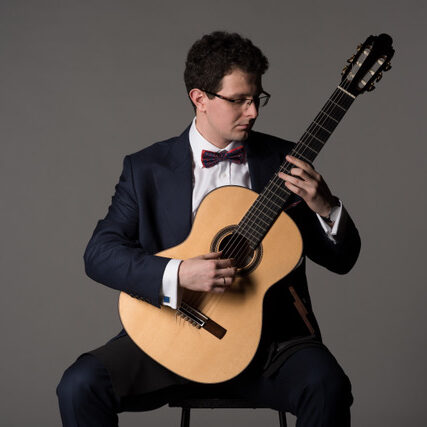 Throughout his music education, he took part in numerous music competitions e.g. in Olsztyn, Chełmno, Krynica-Zdrój, Enschede (Netherlands), Nordhorn (Germany) and Brno (Czech Republic). He participated in one of the biggest guitar competitions ‘Guitar Masters’ in Wrocław (2016). He is laureate of the first prize at the International Guitar Competition ‘Gitara na kresach’ in Chełmno, third prize at the All-Polish Auditions of Music School Students CEA in Warsaw, third prize at the Guitar Competition in Olsztyn, among others.

His concert activity includes solo and chamber recitals. He has performed at many music festivals, including Opera Youth Forum, “Music in the Saviour’s Church” in Bydgoszcz, the Lutheran Music Meridian, the International Festival of Organ and Chamber Music in Markowice, the “Fountain of Music” Festival in Bydgoszcz, the Guitar Festival at the Castle in Golub-Dobrzyń, “Night of the Museums” at the Museum of the Chełmno Region and the “St. John Music Festival” in Grudziądz. In the course of his Master studies, he performed the famous Concierto de AranjuezJ. Rodrigo with the accompaniment of the Student Symphony Orchestra conducted by Łukasz Hermanowicz.

In 2013, he started teaching. He runs the guitar class at the State Primary Music School in Chełmno and the Music Schools in Toruń. Since 2019, he has run together with Dr. Krzysztof Pełech the guitar class in the Music Academy in Bydgoszcz.He has been repeatedly honored with the headmasters’ rewards in Toruń Music Schools and the State Music School in Chełmno due to his teaching results. He was a holder of the scholarship of the Działdowo District Governor and the Rector of the Music Academy in Bydgoszcz.

Marcin plays a guitar made by a Spanish instrument maker, Paco Santiago Marin.